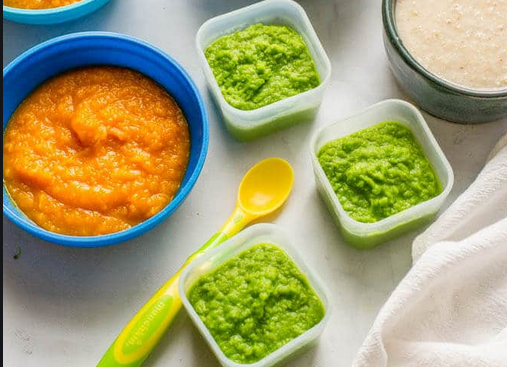 According to Dr Agnese, it is best to start with solid foods when the baby is awake and awake, but if they spit out the food or refuse to eat it, then they are willing to wait a week and try again in another week, she reassured. She said babies are usually ready for solids when they are able to sit up without support, have good control over their heads and necks, are interested in food by opening their mouths and leaning forward when food is offered.

At four to six months, breast milk or formula is the only food your baby needs, but you can still start introducing solid food. While infant cereals are traditionally the first solid food for babies due to their flavour and iron intake, pediatricians say it’s perfectly okay to start with cereals. You can start by introducing them with a cereal and familiarizing the baby with the feeling of the spoon. The iron-fortified rice cereals are the least allergenic type of solid food and should be introduced first, she said.

When you are introducing your baby to solids at four months, there is a lot of conflicting information. If the cereal passes the test, move on to pureed fruit and vegetables until your babies are about five or six months old.

According to the American Academy of Pediatrics, six months is the optimal age to introduce your baby to solid foods. The truth is that everything is different, and so it never hurts to ask the pediatrician during the four-month examination. This is one of the first times that your child should try a solid food such as fruits, vegetables or even whole grains.

You have just completed your four-month examination and received the seal of approval from your pediatrician to start with solids. There’s still some time until your baby is ready to try – test solids that are in front of you.

Once your baby is ready for the level 1 purees, it will be an exciting adventure in the first months of his life.

To help your baby get started in this important phase of discovery, here are the 10 best first baby foods listed roughly in the order we recommend to help them get started. Prepare for a change, because we know which foods to start eating, which to skip and how best to introduce solid foods. When babies eat solid foods, fruit with individual ingredients and vegetable purées are a good start, but not the only option.

This way they still get all the essential nutrients they need, but they have a familiar taste that makes it easier for them to try something new. Babies may meet the requirements for solid food, but breast milk or formula may still be their main source of food until they turn into one.

Try again in a week, but do not try to force your baby to eat something you have refused, and try again within the week.

Another approach that has become popular with babies is weaning by feeding puree to babies as young as four or five months old, which is the most common method of introducing solid food. Some parents wait until their baby is old enough to handle small finger food before feeding it with a spoon. When babies wean themselves, babies can still eat puree, but they must learn to feed with their fingers while holding the baby’s spoon instead of spooning it – feeding them.

At this age, babies are likely to have developed the enzymes necessary for proper digestion. The American Academy of Pediatrics recommends babies eat solid foods at about 6 months of age. By using baby-led weaning techniques, you can serve foods that are too small to break apart with the gums and avoid choking hazards.

Babies, on the other hand, can try a wide range of finger food at six months of age, and this can be a very rewarding experience. Baby-led weaning can pose some difficulties in food preparation, as parents must ensure that they give their infants soft and chopped food, such as smooth, thin purees, that do not pose a risk of choking. Fruits are only recommended to babies if they have been prepared in accordance with development.

Baby – led weaning can also help babies to have more to do with their family by focusing on spoon feeding. Ideally, you could eat the same meal with both babies and cut their portions into smaller, softer pieces so that both can eat at the same time.